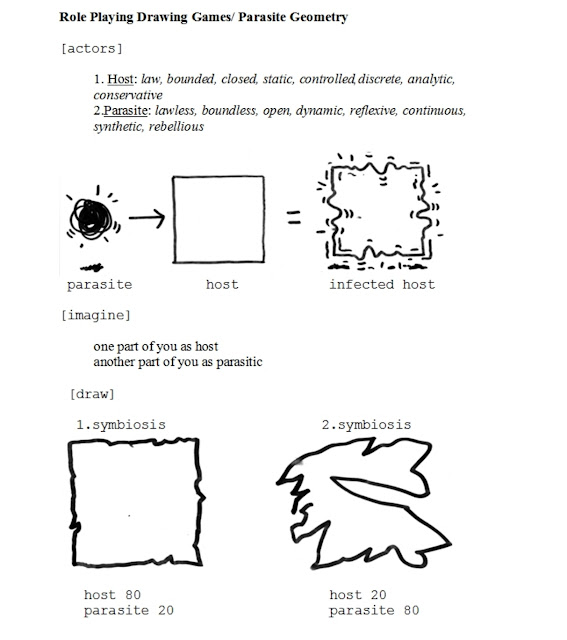 2:[you are parasiting your arm]
make it draw circles

3:[your arm is a parasite]
(arm):draw circles

This is an attempt to recreate a perceptual illusion that I noticed while I was running on a crosstrainer in a room on the second floor.
In front of me is a big window that looks over an open field.
As I am running my head is directed towards the window and I focus on the movement of my body.
A playful thought pops up; Am I moving or is the room moving?
(An illusion that is similar to the one that you can experience when you are sitting in a stopped train while the train next to you starts to move, also know as #parallax )
First I shift my focus of attention from my body(1) to a point outside(2), and then to a point on the horizon(3).
I notice that the point where I focus my attention becomes a rotational point or axis.
In a way, shifting my attention to a different reference point changes the way the world moves.

Is this the same image schema that is responsible for shifting cognitive frames of reference?

In the book the Parallax View Slavoj Žižek used parallax to illustrate 'the insurmountable gap between two positions.' Synthesis between these positions can only be achieved through a parallax shift. The experience closest to the truth or the real is at the position of "minimal difference". 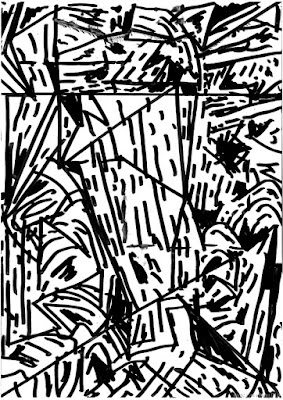 An analogy between the process behind this drawing and the socalled ‘surprise’ version of the 20 questions game told by the physicist John Wheeler:

“We had been playing the familiar game of twenty questions.


Then my turn came, the fourth to be sent from the room so that Lothar Nordheim's other fifteen after-dinner guests could consult in secret and agree on a difficult work. I was locked out an unbielvably long time. On finally being readmitted, I found a smile on everyone's face, a sign of a joke or a plot. I nevertheless started my attempt to find the word.


These answers came quickly. Then the questions took longer in the answering. It was strange. All I wanted from my friends was a simple 'yes' or 'no'. Yet the one queried would think and think. "yes or no", "no or yes", before responding. Finally I felt I was getting hot on the trail, that the word might be cloud. I knew I was allowed only one chance at the final word. I ventured it:


"Is it cloud?" "Yes," came the reply, and everyone in the room burst out laughing. They explained to me that there had been no word in the room. They had agreed not to agree on a word. Each one questioned could answer as he pleased -- with one requirement that he should have a word in mind compatible with his own response and all that had gone before. Otherwise, if I challenged, he lost. The surprise version of the game of Twenty Questions was therefore as difficult for my colleagues as it was for me.


(..)I, entering, thought the room contained a definite word. In actuality the word was developed step by step through the questions I raised(..)Had I asked different questions or the same questions in a different order I would have ended up with a different word (..)(1)

i.e. Every line in the improvised, objectless black on white drawing is an intuitive answer to a proposition evoked by the temporal state of the drawing.
And every answer moved the drawing closer to a more or less unique final shape unknown beforehand.

In Some Strangeness in the Proportion:
A Centennial Symposium to Celebrate the Achievements of Albert Einstein
Ed. by H. Woolf, Addison-Wesley, Reading
https://jawarchive.files.wordpress.com/2012/02/beyond-the-black-hole.pdf 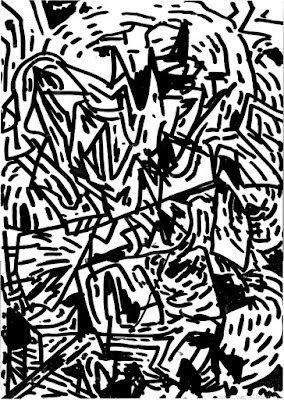 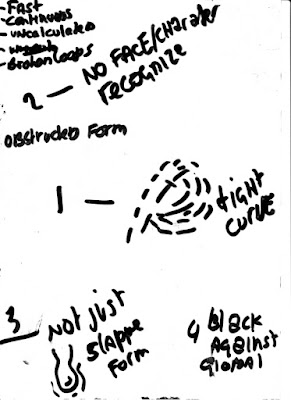 How a line was drawn by a moving point 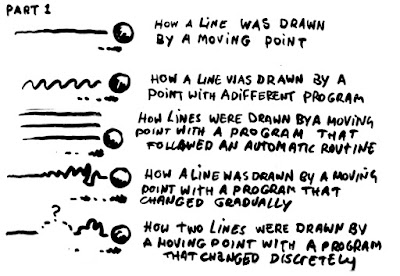 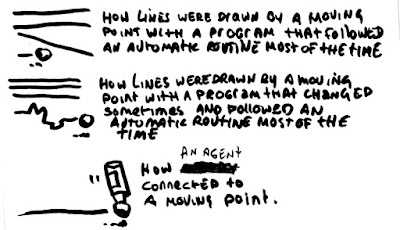 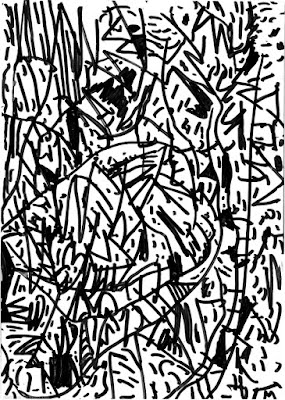 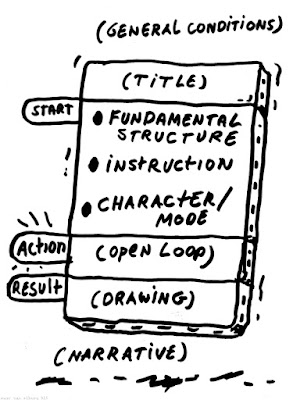 This is Not a Profile [I Will Not Follow} 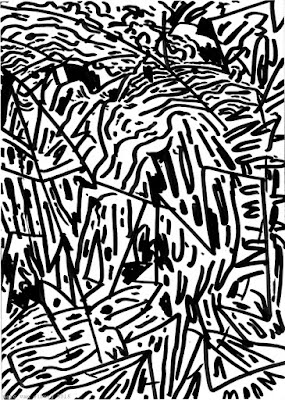 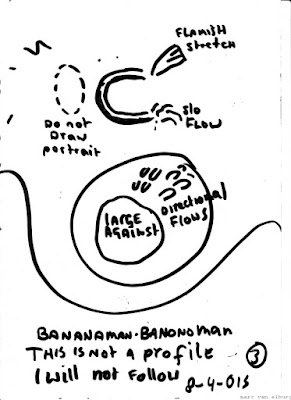 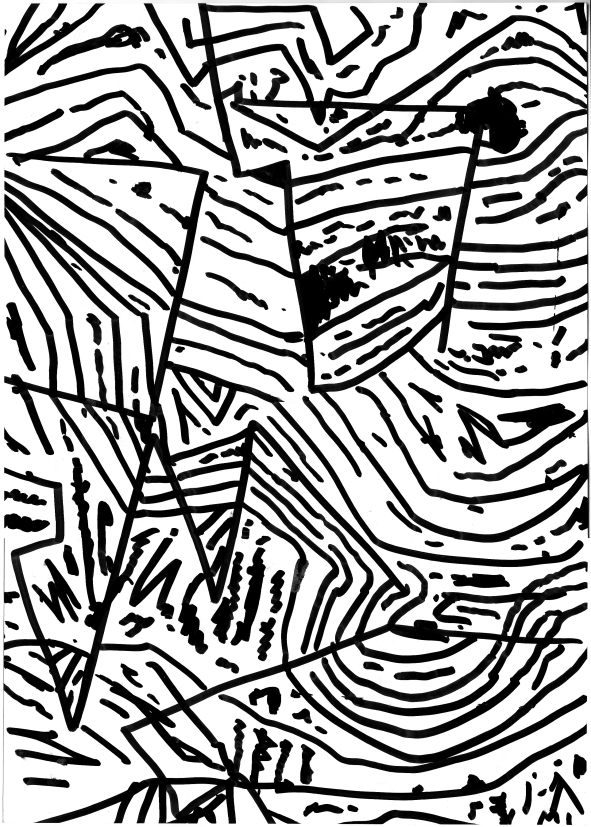 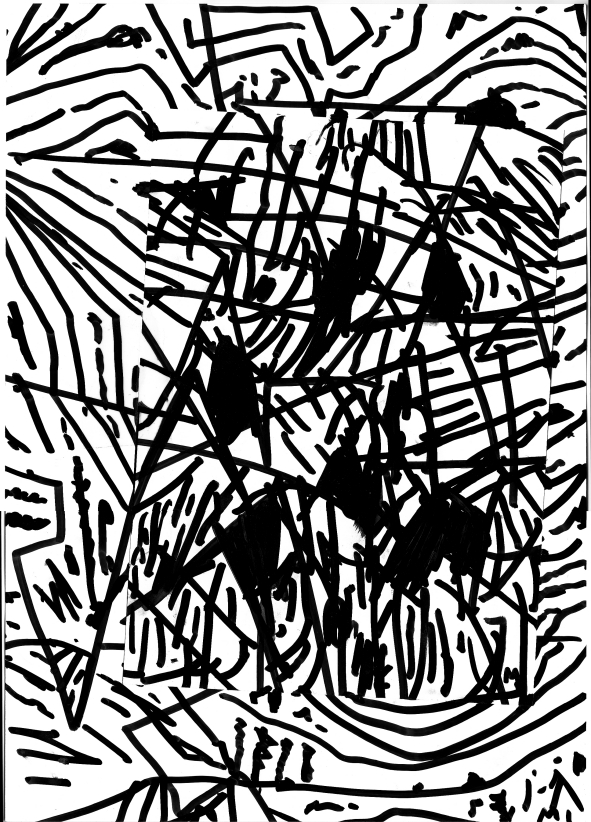 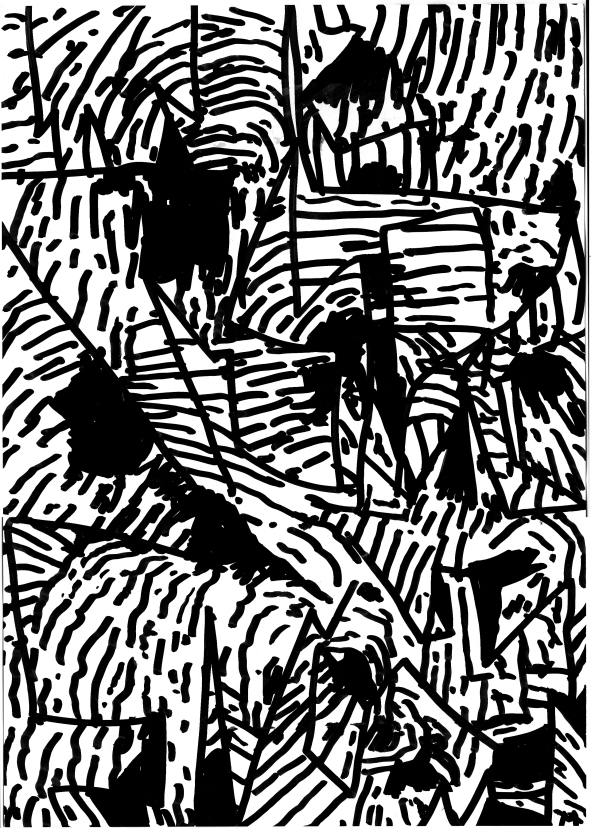 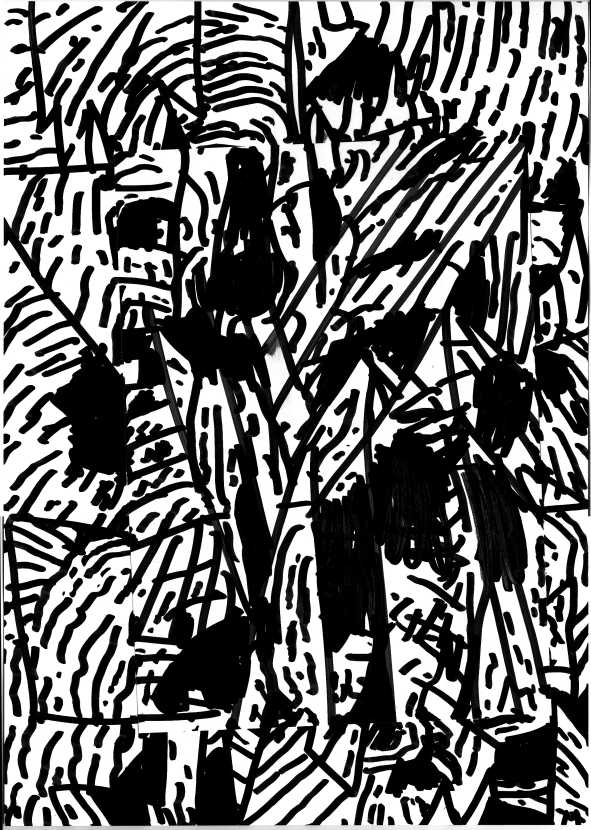